I often wonder how many hours of TV commercials, movies, social media, video games lead a kid to decide to eat a Tide Pod. Regardless of the number of hours required, the bottom line is the entertainment industry, and mass media can accomplish an amazing job of persuading human beings to lose all common sense. Add that to the decreasing standards in our educational system, and you have Tide Pod eating juveniles. The same mentality which is so easy to manipulate into eating a laundry product, can be lead to believe a silencer can “silence” a chemical reaction capable of pushing a solid piece of lead thousands of feet per second.

Having already covered the physics behind suppressing the sound of a gun being fired, let us turn our attention to what all that science produces in the real world. How loud or quiet a sound is measured in decibels. Silencers reduce the sound signature of a gun shot, on the average, by about 30 decibels. Dependent upon the technology and the size of the silencer, there can be a variance in the number of decibels reduced by suppressing a firearm. But for the average off the shelf suppressor, a decrease in 30 decibels is acceptable. One may ask, what does reducing 30 decibels really do to how I perceive the “loudness” of a gun shot?

An easy way to explain that is to understand that as decibels increase or decrease, perceived hearing is affected exponentially. For example, when decibels are increased or decreased by 10, the perceived noise to the human ear is doubly increased or decreased respectively. So going from 10 decibels to 20 decibels either way will be twice as loud, or twice less loud to the human ear. So going from 0 to 30 decibels is an exponential increase to the 3rd power, doubling 3 times. Something that is 100 decibels is 8 times less as loud as something which is 130 decibels. 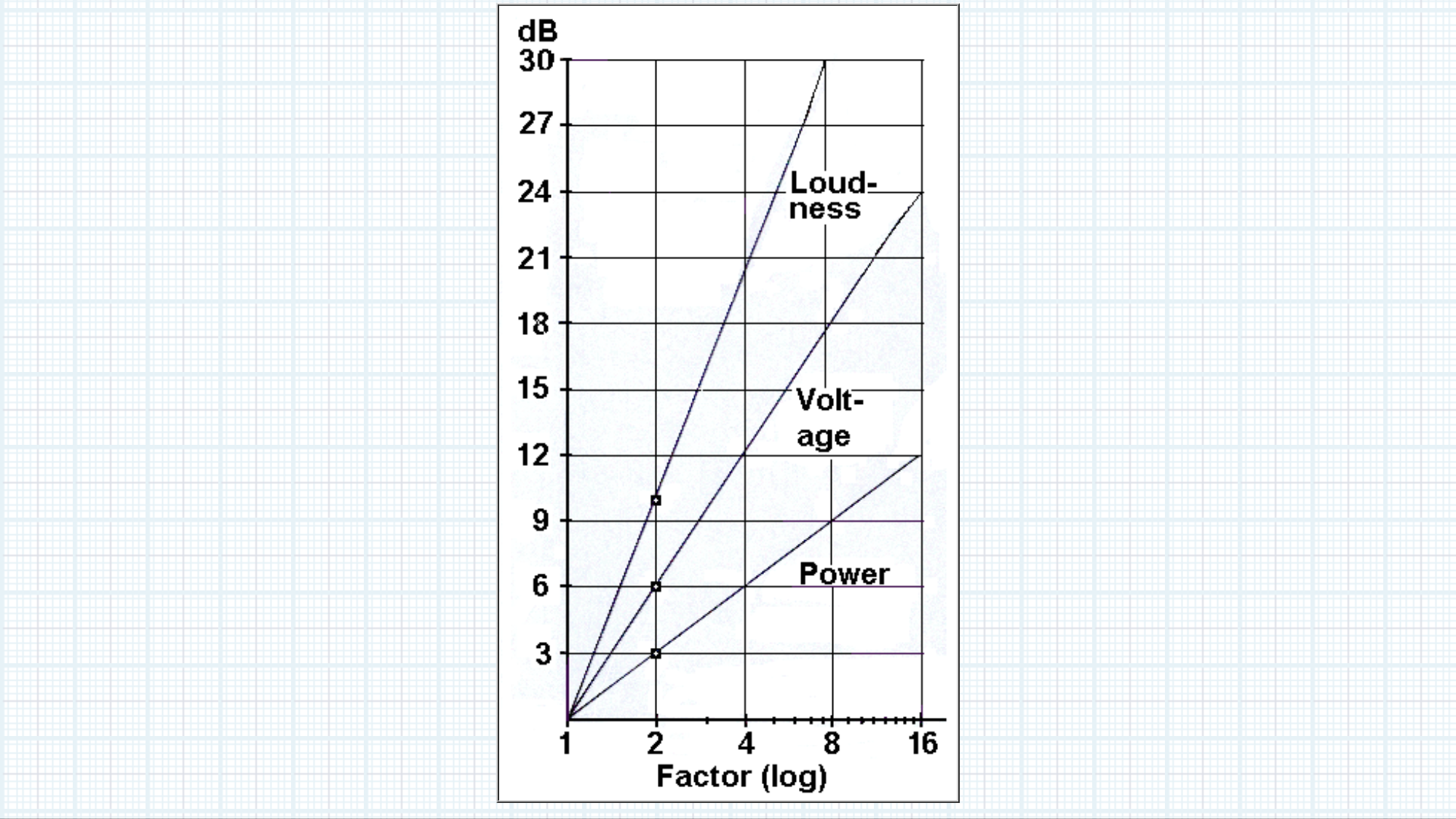 To make it easier to under stand this, let’s compare decibels to every day noises we encounter. 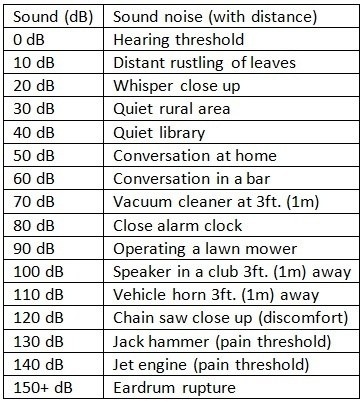 Using the above chart, we can see that a speaker 3 feet away from a person in a club is about 100 decibels, and jack hammer is 130 decibels. In relative terms, this makes the jack hammer 8 times as loud as a speaker 3 feet away from you in a club. Because everyone perceives noise differently, and some jack hammers and speakers are louder or quieter than others, we must understand that these examples are based on an average. Nevertheless, it does give us a baseline from which to work.

Assuming you have made it this far with out saying “boring”, and are not contemplating eating your next Tide Pod, let’s compare the above samples to suppressed and unsuppressed guns. 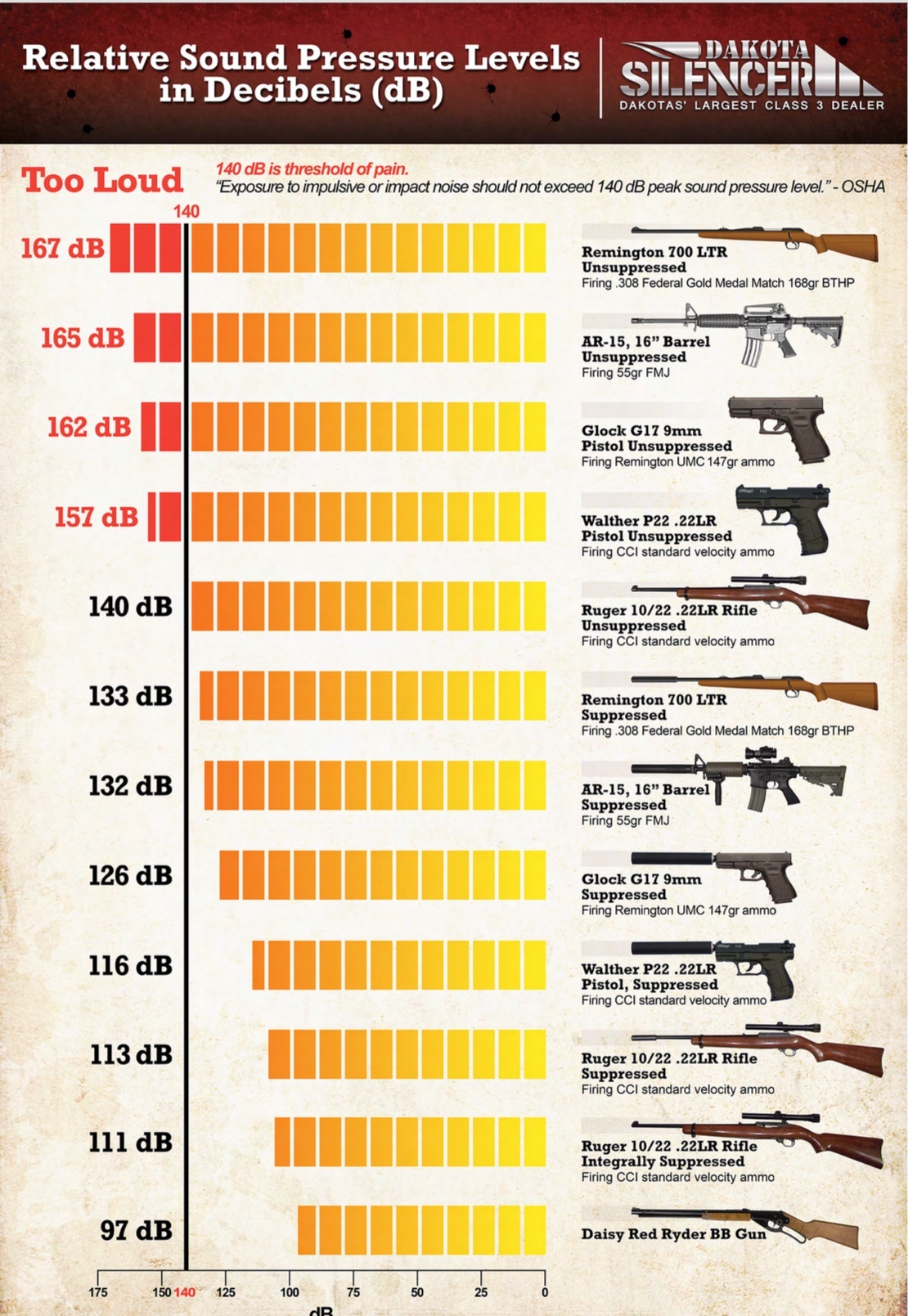 As you can see, an unsupressed AR-15 measures at 165 decibels. By attaching a silencer to the AR-15, we can reduce its sound imprint to 132 decibels, for a reduction of 33 decibels. By doing this, we have made the AR-15 8 times less loud. There are other examples you can play with using the charts provided, but you get the idea of how much sound you can reduce with a silencer. But, how does 8 times less sound to the human ear? Let’s take a look at the hearing threshold decibels chart and see what conclusions we can draw. 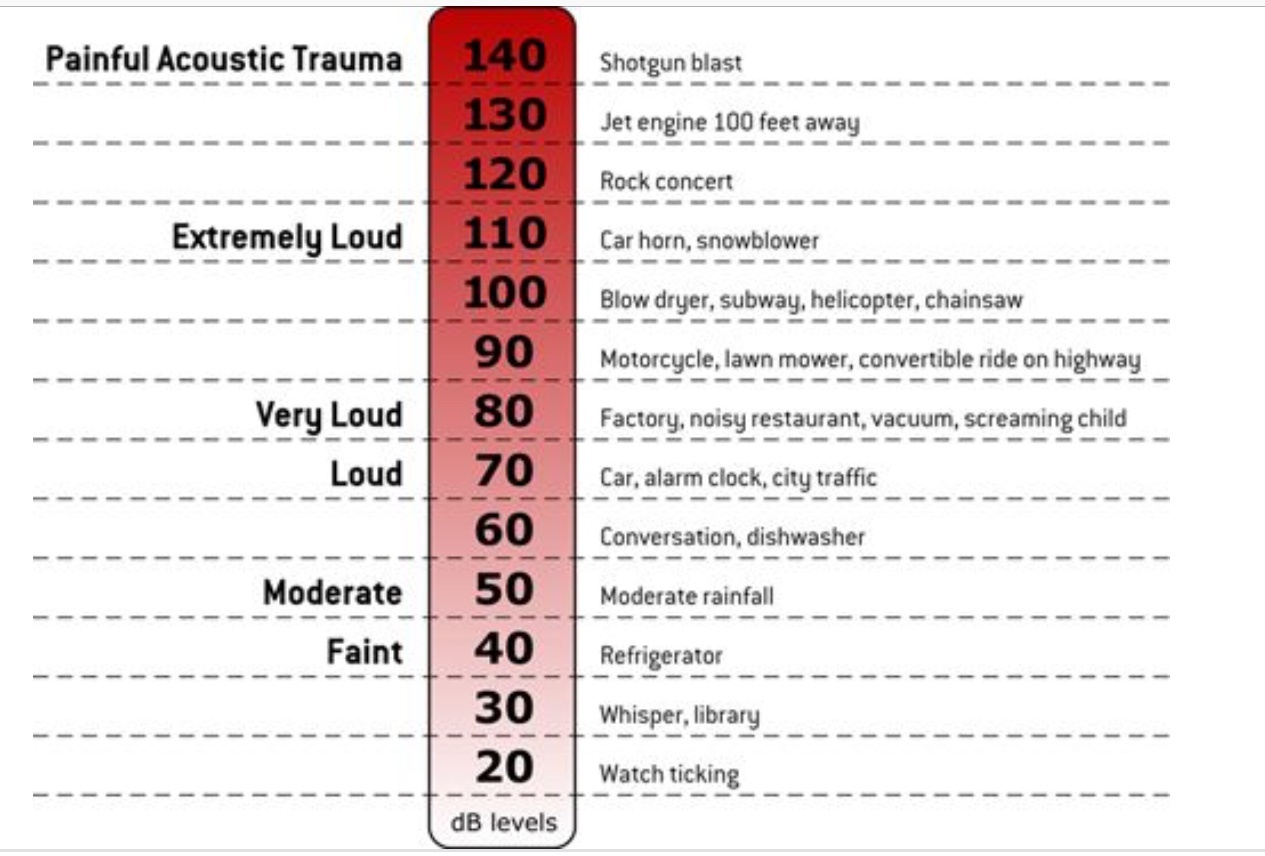 The unsuppressed AR-15 with its 165 decibels sound signature comes in at 25 decibels above perceived painful hearing, and the beginning of hearing damage. Suppressing it to 132 decibels, while making hearing safe, is still approaching the pain threshold. 8 times more quiet than unsuppressed, and not permanent hearing damage level, but certainly not the “pew pew movie magic” that the Tide Pod eaters want you to believe it to be. While it may be hearing safe, it will not make you the invisible ninja assassin capable of killing with a whisper. For the civilian market, silencers are indeed designed for hearing protection. Are there samples that can be made to sound soft as the whisper of your first love on a summer night? Maybe, but I haven’t seen it myself, nor do I think anyone of us would be able to access it, or afford it.

So “good talk”, but can you show us what you are talking about? Well, let’s see if this will help you. This is how the Tide Pod eaters and Hollywood want you to think the deadly silencers work:

This is how real silencers work:

This is an example with an AR-15. It’s an excellent illustration of the actual noise of a suppressed and unsuppressed AR-15 at various distances from the shooter’s perspective, and how it sounds down range. After all, it’s not just where you shoot your super silence ninja tool of death, you are supposed to conceal all sound signatures from people next door, down the street etc… Let’s see if there is any truth to that.

Disappointing isn’t it? The “sound of silence” is akin to a car horn. Do you think that a car horn in the middle of the night can conceal your “double secret probation hit” on an unsuspecting target? Will this super tactical piece of gear allow you to get away with crimes unabated? It may, but not in the way that Tide Pod eaters and their congressional representatives would have us believe. So, why would you even want such a thing? Well, despite it not being the “Silencer” Hollywood describes it to be, it does offer some useful tactical advantages in comfort and SHTF scenarios. That’s the topic in our next discussion.